How water helps in anti aging?

Water is considered to be one of our most important nutrition and one can survive without water only for a maximum period of 3 days. Water also plays an important role as it is included in each and every metabolic reaction of our body. In spite of the fact that water is very healthy for us, most of the times, we ignore drinking water.

Consider these facts regarding water –

How much water do we need per day?

We lose water through sweating sometimes noted and other times without even thinking about it – exhaling, urinating as well as during bowel movements daily. For our body to function properly, we need to replenish this water by taking in beverages as well as foods which contains high water content.

We must realize that when our body is properly hydrated, our blood vessels and our heart will only function much better. Apart from that, lots of other changes can be experienced within ourselves such as – we begin to think better, we all will live for longer period, we get strong and our endurance also is better, we feel healthier, we feel much better etc.

A stronger cardiovascular system and healthy blood circulation ensures that you live a long healthy life.

Sufficient hydration also has other added benefits which help us eat less and thereby giving a feeling of satisfaction which is the most important ingredient for maintaining and achieving a healthy and lean body. Eating less is important for longevity as well.(link)

Here is one study regarding calorie restriction and longevity to ponder about. It was reported in the Science Journal (Edition of November, 2002), a research conducted regarding studies with fruit flies, that have many genes which are very much similar to mammals, has shown that enzymes (rpd3 histone deacetylase) were likely to be the key towards longevity and it also proved that when we begin reducing intake of calories drastically, it helps in extending our lifespan.

They were in fact planning to develop a drug that will mimic the effect without the need to consume lesser food. But, during this period, since most of the studies have proved that consuming low calorie food helps us in different other ways apart from providing longer lives such as fewer cancers, better muscle tone, better memory, delaying of gray hair, fewer heart problems etc. we might just begin counting our calorie intake because of the various benefits it provides along with controlling our weight.

During one of the studies conducted by Michael Boschmannthe at Berlins Franz-Volhard Clinical Research Center, he along with his fellow workers tracked the expenses of energy from seven women and seven men, all of whom were totally healthy and not overweight.

Each of them were given about 17 ounces of water for drinking during which period their metabolic rates (the rate at which the calories get burned) were increased by almost 30 percent.

So, drinking water also helps in having a healthy metabolism, thereby cutting down body fat and we all know weight loss is important for longevity and anti aging. Body fat is linked to decrease in growth hormone levels.

The increase in the metabolic rates began to take place within 10 minutes and it reached its maximum level after just about 30 to 40 minutes. This study also proved that an increase in the rate of metabolism also differed from both men and women.

Research proved that about 40% of the calorie burning increase occurred because of the body’s attempt to heat ingested water. Therefore, it was concluded after this research that the colder the water, the better it is for human beings.

So the question is, How much water do we need per day?

This can be quite a tough. For an average healthy adult, every day water consumption may vary widely. Most of the people drink water to satisfy their thirst, to provide perceived water requirements and “out of habit.” A minimum of three approaches calculate the overall water needs for a healthy, less active adults living in a temperate climate.

Replacement approach. The standard urine excretion for adults is normally 1.5 liters per day. We lose approximately a liter of water every day through respiration, sweating as well as bowel movements. Meals we take constitutes about 20 percent of our water intake, So, if we drink about 2 liters of water or any other drinks each day (a bit more than eight glasses), together with our regular diet, we can replenish the lost body fluid.

Dietary recommendations. As recommended by the institute of medicine, men consume about 3 liters of water or any other bevareges per day and women consume 2.2 liters (about 9 cups) of total beverages per day. 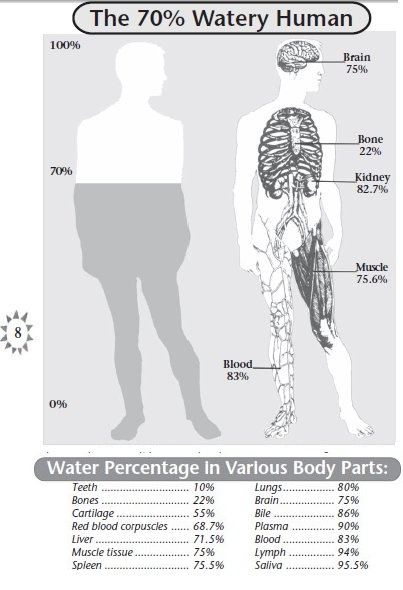 Some of the food which has High Water content

Harvey and Marilyn Diamond, authors of the best selling book named ‘Fit for Life’ emphasized that human beings who drink water on a daily basis, must also concentrate on eating foods that contains high water content in its natural state.

Our planet Earth requires 70% water for survival and therefore so it might be true that even our body requires equal amount of water for survival? That is the reason why we must opt for water content food to void the gap between what we take in and what we require when it comes to water.

Water based foods which consist of 70% water which we need to consume apart from drinking normal water are fruits and vegetables. The balance 30% must consist of whole grains, dairy products, legumes, meats etc.

In case you get to eat ‘live’ foods which contains lots of water content, it generally means that you are eating foods which meets almost all the specifications that is required by our body. All the required amount of vitamins, proteins, enzymes, minerals, amino acids, fatty acids and carbohydrates that are required by a person can all be found in most of the vegetables and fruits.

When we eat water filled vegetables and fruits, it will automatically transport all the nutrients into the intestines of human body where it gets soaked up which in turn acts like a purifier and cleanser of our body and also helps in transporting all the toxic wastes from body cells.

Just drinking normal water will not help in the internal cleansing which your body craves to receive. Drinking only water does not provide the required amount of enzymes that vegetables and fruits contain. The vitamins and minerals found in the natural live foods get absorbed in a better way by our body than the supplements that are found in drug stores.

In spite of the free radicals which naturally occur in our body which are a byproduct of metabolism, our body will not be willing to take charge of the excess amount of free radicals which induces life shortening damages. The external source of free radicals which we have at times also includes what we prefer eating. A normal American diet consists of mostly processed, high fat, preserved, chemically treated and pesticide laden foods and is most likely lacking in antioxidant rich, free radical fighting vegetables and fruits.

When we consume more than 10% calories from fat, it will dramatically reduce our body’s load of free radical.

We must remember that the more amount of fat we ingest in our body, the more amount of free radicals our body prepares. That is exactly the reason why diseases such as cancer and heart attacks occur. Both these diseases are directly related to accruing free radical damages and are most commonly found in people who have the habit of consuming high fat diets.

What Water to drink?

Simultaneously, frequently drinking good water is very important. I am of the belief that the best water which we can drink without fear is the water which is being refined by reverse osmosis.

The next best drinking water apart from reverse osmosis is the spring water. Tap water which we receive at home is not at all good since it contains fluoride (though this is just not good) and chlorine which is put to kill the bacteria in the water, but at the same time these are harmful for human beings.

Distilled water is also not at all good as its energy has been changed. If ever you travel in Europe, you will find distilled water being labeled as ‘Not for consumption for humans’. Even mineral water which you buy in bottles from stores is not good for human health mainly because the minerals that are included are not actually meant for a human body.

Water that you receive and which comes from the top of the mountains is also not good since these waters lack the sufficient quantity of oxygen.

Many people can actually solve their anti aging problem and their health problems by only improving their consuming more quantity of good water.

So, now you know how water can benefit your anti aging efforts, go grab a glass of water!